All Berezovsky got was this lousy T-shirt 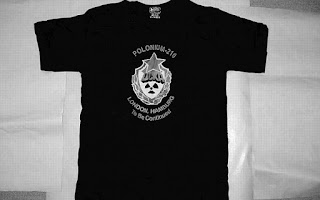 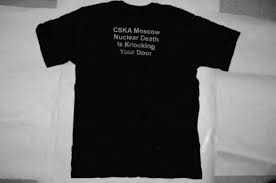 
This ‘fashion statement’ is imprinted on a T-shirt which, in July 2010, was purportedly sent to Boris Berezovsky by Andrei Lugovoy, one of the two Russians suspected of poisoning Alexander Litvinenko.

“…it demonstrates that Mr Lugovoy approved of Mr Litvinenko’s murder. It was also, clearly, a threat to Mr Berezovsky. Further than that, the T-shirt could be seen as an admission by Mr Lugovoy that he had poisoned Mr Litvinenko, made at a time when he was confident that he would never be extradited from Russia, and wished to taunt Mr Berezovsky with that fact. Alternatively, it could, perhaps, be seen as an extraordinarily tasteless joke.”(Litvinenko Inquiry report, 8.125)

On any view, Sir Robert? Must we therefore assume that as far as his intellectual faculties were concerned, Lugovoy was at so mystifying a disadvantage, not only would he send this message to his most vociferous accuser, but – eschewing their common native language – for the sake of the cameras, he would write it in the language of the country which sought to put him in the dock? Surely, surely something as crudely obvious as its ‘deliberate mistake’ could not help to convince anyone that this was a ‘genuine article’? Are we supposed to be impressed by the fact that, whoever was the true fashion designer, they correctly identified Lugovoy’s favourite football team? In recorded history, is there a single instance of a crime suspect who combined this degree of outright stupidity, with this much determination to parade said stupidity in front of a worldwide media audience? On any view?
According to Owen’s report, Lugovoy gave his T-shirt to an acquaintance called Raphael Filinov, asking him to take it to Berezovsky. This provenance was attested to by the latter’s personal aide, Israeli-Russian lawyer Michael Cotlick:

“Mr Cotlick said that he was aware that Mr Filinov had a personal relationship with Mr Lugovoy. He said that he had “no doubt whatsoever” that Mr Lugovoy had himself handed the T-shirt to Mr Filinov, in order for him to give it to Mr Berezovsky.”(8.124)

Leaving garment manufacturing to one side for the time being, however. Elsewhere in his report (8.132), Owen scrutinises the results of a lie detector test conducted on Andrei Lugovoy in April 2012, by fully qualified British father and son team Bruce and Tristam Burgess:

“Bruce Burgess, who took the lead role in conducting the test, announced the result to Mr Lugovoy in the following words, “I can tell you the result was conclusive, you were telling the truth, no deception indicated.””

On the advice of a Professor Bull, Sir Robert finds fault with the way this test was conducted; he thinks it possible Lugovoy took ‘countermeasures’ to defeat the test; he calls Bruce Burgess’s integrity into question over a past transgression; he even casts doubt on whether the result did in fact indicate that Lugovoy was telling the truth.

“I do not feel able to place any weight at all on the outcome of the test.”

Of course, this was his prerogative. However, isn’t it fair to contrast his dismissive attitude on this matter, with his uncritical embrace of the authenticity of the T-shirt? Moreover, isn’t it legitimate to ask why the same person who sent Berezovsky the unusual CSKA away strip, would risk taking a lie detector test at all? And while we’re back on the subject of designer clothing – with reference to their story about how the T-shirt came into Boris Berezovsky’s possession, would Michael Cotlick and/or Raphael Filinov be prepared to submit themselves to lie detector tests?
“I found Mr. Berezovsky an unimpressive, and inherently unreliable, witness, who regarded truth as a transitory, flexible concept, which could be moulded to suit his current purposes. At times the evidence which he gave was deliberately dishonest; sometimes he was clearly making his evidence up as he went along”[1]

James
Hi, I'm James Bruce, a 46 year old chap who left Oxford in 1976 with a degree of English comprehension, grew up mainly in Bristol and studied Russian and Mediaeval History at St Andrews. Currently working on a trilogy of books about long-distance, walking-a-lot-of-the-way pilgrim journeys; to Jerusalem (2010); the Basilica of Our Lady of Guadalupe, Mexico City, via Siberia (2011); and from Blantyre Scotland to Blantyre Malawi (2013). I hope this endeavour will be useful for Mary's Meals, the non-denominational charity feeding more than 1.5 million children worldwide and helping them gain an education. If you would like to donate to Mary's Meals please call 0800 698 1212 or visit www.marysmeals.org.uk.